When the web was but a weblet we used Gopher not Google to get around. This was the early 90’s. Before 2.0, before Youtube and Facebook. Before homepages even.

I spent hours behind on aging VT-100 terminal in the basement of Dobson Hall chatting to fellow students on the other side of campus by typing the words ‘talk p4562’ (or whatever code they had been assigned) followed by a line of text. We played Viking-MUD, not World of Warcraft back then. It was basically the same thing – but text only; we had to use our imaginations to picture the orcs and wizards.

The internet was a small, secretive place inhabited by a privileged little group of mostly white, male, college educated geeks. Perhaps only a few hundreds of thousands; 99% of the people in the real world hadn’t even heard of the Internet, let alone access to it.

Little did anyone know our secret garden would soon overgrow the entire planet, teeming with life and possibilities, fertile soil for big ideas. With billions of people online today it’s easy to feel a little disconnected from what’s going on at the fringes of the web. 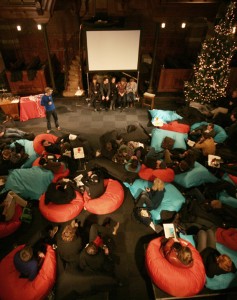 To tap into the minds of today’s online avant-garde a colleague of mine, Joris Voeten, headed out to an event organized by the Rotterdam Design Platform. Over a hundred online savvy students and designers gathered in a stone-cold church-building to share their thoughts on the web and social media. All the kids in the room looked like they grew up on a strictly digital diet – they don’t remember a time when people used floppies (or tapes!) to share files. I saw more MacBooks and designer glasses than I could shake a stick at; this clearly was a gathering of the creative class. I was the only person in the room boring enough to wear a business suit. Joris and I eagerly sat down on two big cushions – beer in hand.

‘The Web as we knew it 2 years ago is dead’ the first speaker proudly proclaimed. Joris and I veered up. After that one hipster after another took us along their tweets, tumblr and other tools at a dazzling pace. They were on a roll! Kids these days collect and share thousands of pictures, links and messages with dozens of their friends – they keep in touch with people all over the world (‘I could be tweeting to somebody in the USA or Berlin while having breakfast’).

Wow. How disappointing. What else is new?

These kids came off like a bunch digital stamp collectors, claiming bragging rights over the number of twitter-follewers like it’s a game of Pokémon. During the debates both the speakers and the audience seemed almost as disconnected and clueless as I am: ‘Social media are cool but you won’t make any money using Twitter any time soon’. Tell that to Kim Kardashian who’s making a cool $10.000 per tweet or to Michael van Poppel who cashed in his twitter feed with MSNBC barely two and a half years after he started it.

I guess the next wave of big ideas will be born in Bangalore, Beijing or Bogota cause it might not happen here.